The eighth edition of this unique race, which runs through Menorca in three stages on foot or by mountain bike, is drawing near. It will be held on November 4, 5 and 6, 2022 and will feature an exciting route that will go around the whole island. We discover with ANNA COMET the details of the itinerary of the TrailRun Epic 360º modality.

Three stages running by the unspoilt coast, steep and full of surprises of Menorca. The wide diversity of lands and natural landsca­pes of each stage make each of them a uni­que experience, totally different to the others. An epic and unforgettable adventure.

The race route consists of the best sections of the Camí de Cavalls, as well as other paths that run closer to the sea. All in all, it completes the island circumnavi­gation, with an average of 61.7 km and 1,060 m of elevation gain per stage, totaling 186 km and 3.176 m of elevation gain.

The stage starts on the Camí del Pilar and faces the toughest section that can be found on the entire Menorcan coast. The terrain and slopes in the first few kilometers, and especially in the section between Es Alocs and Cala Barril, can become quite a challenge for the runners. From Cala Barril the orography softens, although the kind of terrain remains similar when passing through the area of the Binimel·là and Cavalleria beaches.

Everything changes drastically from the Cala Tirant area (km 21). Runners then pass through a combination of forest tracks, fields and paved sections. A generally undemanding and very fast stretch leads to the residential areas of Son Parc and Arenal d’en Castell.

The route crosses Addaia and skirts the Port of Addaia while approaching the Natural Park of s’Albufera des Grau. The landscape of the Mongofra salt pans is already part of it. The route crosses cultivation areas until it reaches the coast again, near the Pou d’en Caldes cove.

Next, a paved section brings the runners to Favàritx (km 47.3). From there on, different kinds of paths, trails and sandy areas will alternate, all the while passing through several coves such as Arenal d’en Morella or Cala Tortuga, sa Torreta or Tamarells. Es Grau marks the last stretch within the Natural Park.

From the Caleta de Binillautí and up to Sa Mesquida, three short but intense climbs await us, mostly on a narrow trail, in an area of low vegetation. To finish the stage, from the Raconada de sa Mesquida Vella, the route enters a restricted access area in the Sant Isidre area and takes the runners to the Maó naval base. We will go around Pinto Island before crossing the finish line, located on one of the docks of the naval base, formerly used by submarines.

The stage soon enters the Camí de Cavalls, which we will follow for almost the entire stage. We are in one of the most iconic spots in the area: the Cala del Pilar. Beautiful, it is quite wild really.

Later on, We are passing through a cobbled section, which is a piece of trail that has been built thanks to the Camí de Cavalls 360º conservation project, in collaboration with the Consell Insular de Menorca.

In Es Alocs is where the steepest part of the three stages begins. We reach 135 meters above sea level, the highest point of the Camí de Cavalls. It doesn’t seem like much, but the numbers here are deceiving, because here everything goes up and down… It’s a leg-breaker in which you really accumulate.

At km 17, we have already passed the hardest part, with the higher elevation gain, and we enter a really beautiful area, running along the coast, with much shorter ups and downs. A softer and very beautiful area, surely one of the most spectacular in the race course.

A few kilometers further, we leave the coast behind and enter a more inland area. At km 27 we find a rolling area, fast, with a wide path, where you can let your legs go and run fast. A good example of the diversity of the island. In the same stage we have gone through sections of coast, inland stretches with forest, and now we are in an area of fields, already inside the Natural Park.

In the Favàritx area, there are less than 20 km left to reach the finish line. It really is an easy running area… But we can notice the kilometers we have already done. We have passed a fairly uneven first part, then an easier but very leg-breaking part, and now those kilometers are beginning to take their toll.

When we are a little less than 10 km from the finish line, we come from a very beautiful trail area, with more coastal sections, others with forest trails, and now we will do the last three climbs before facing the final descent to the finish line. 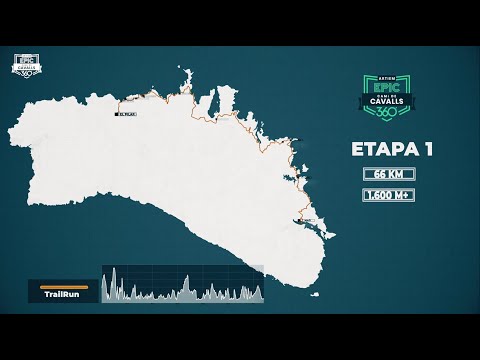 A stage that covers the south of Menorca in all its splendor, with its limestone cliffs, white sand beaches surrounded by pine forests and ravines that give character to its relief. It starts at the Es Castell football field, through a section of fields and a more rocky stretch of coastline before reaching Punta Prima (km 9.0). The next almost nine kilometers cross such emblematic urbanizations as Binibèquer and Binissafúller along the seafront.

Near Caló Blanc, the path leaves the coast behind, passes through Es Canutells and near Calescoves before reaching Cala en Porter and the second refreshment point (km 29.7). The ravines of Cala en Porter and Llucalari are the forecourt of Son Bou. The route crosses the urbanization, as well as the mouths of the Becs and Son Boter ravines before returning to the coast at Platja de Talis.

From here, the route follows the coastline until reaching the finish line, with sections of the Camí de Cavalls and other unprecedented sections along a coastal trail. The stage passes through many coves and beaches such as Sant Tomàs, Binigaus, Cala Escorxada, Cala Fustam, Trebalúger and Cala Mitjana. The terrain is very hard, rocky and leg-breaking.

The finish line, after crossing the entire beach of Cala Galdana, is located in front of the ARTIEM Audax, the official hotel of the race.

This one will be the shortest of the three stages. It runs through the southern part of the island, with very different landscapes and terrain than yesterday. In the southeast corner of the island, we find many typically Mediterranean residential areas, as is the case of Alcalfar. We are going through a fairly flat area, where we combine rocky sections, paved sections and fields.

We are in the southern half of the island, an area with many ravines, like in Llucalari. They are short sections in general, but they really make it a very leg-breaking track. Also, we are already about 20 km from the finish line, and we can already feel that we started a while ago.

From Binigaus we enter a coastal trail that is already outside the Camí de Cavalls. It is a spectacular and unprecedented section, which will be hard due to its rocky and irregular terrain. It’s 7 km of super technical terrain. It does not have too much climbing, but the fact is that it does not let you run smoothly. It is an end of stage that will really make a difference.

When we left behind the most technical and rocky part and we have 3 km left through the forest before reaching the finish line. 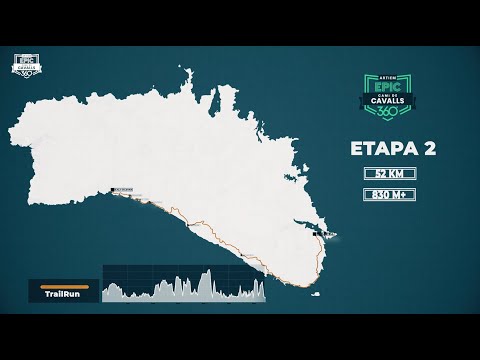 From Ses Fontanelles, however, there is a sudden change in the terrain and the landscape becomes a never ending rocky platform. It is true that this is the flattest area of the island, but the terrain is really hard for the feet and forces you to be focused all the time on where you step. It is a much tougher stage than the elevation profile suggests. The low vegetation predominates as Cala Morell (km 13.4), Punta Nati and the iconic Pont d’en Gil are left behind and the route enters the urban area of the surroundings of Ciutadella.

Towards the end of the stage, after leaving Cap d’Artrutx behind (km 45.2), the route passes by some of Menorca’s most renowned beaches. Son Saura (km 54.4), Cala des Talaier and Cala en Turqueta are the first ones. The route separates at this point from the Camí de Cavalls to follow a coastal trail and pass through Macarelleta and Macarella.

Runners will still have to overcome a final climb before approaching Cala Galdana and crossing the finish line, located again in front of the ARTIEM Audax, the official hotel of the race.

We move north again, and we start from El Pilar, the same place as the first day. We have a first introductory section of about 11 km where we will run easily, with forest and field areas. And then, after kilometer 11, we enter the limestone platform that will take us to the finish line, in a very technical, demanding and rocky area.

The limestone area has a very, very rocky soil. Before arriving to Ciutadella and crossing it, we will have already done many kilometers with this rocky terrain, and we still have many more ahead. A land where you don’t make a single straight step. It is very, very demanding on a technical level and for your feet. Anyway, the landscape is beautiful and it’s difficult not to stop to take pictures.

Towards the end of the stage, the very rocky terrain is combined with beautiful coves, white sand and turquoise sea, which is what we all want to see.

In short, already at the end of the third stage, for me it is a really wild, beautiful and unprecedented island. Obviously following the Camí de Cavalls, but also some stunning coastal trails. 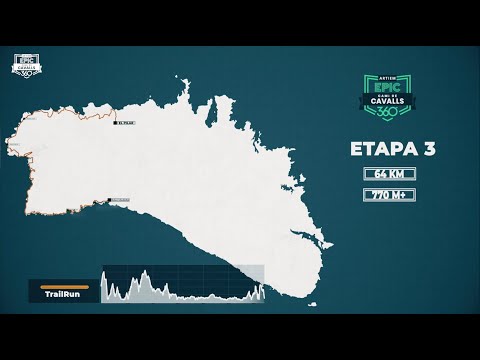