The itinerary goes through the rest of the island’s Tramuntana area and allows you to discover some of its most emblematic landscapes, such as Cala del Pilar and La Vall. Towards the end of the stage, it enters the dry Menorca and finishes in Cala Morell, a residential area steeped in history.

Camí de Cavalls 360º offers a good number of modalities, formulas and formats for participants to enjoy the route with a path adapted to their pace, level and time availability. The Hiking and Trekking 10 stages program is one of the best suited to hikers with some experience and looking for medium difficulty routes.

The 185 kilometers of distance and 2,741 meters of elevation gain are divided into ten feasible days of about twenty kilometers on average. Participants should only think about enjoying the landscapes and spots through their path. The organization team will take care of the rest: advice on the route and possible variants, logistical issues and even transfers to accommodation when it is not possible to reach them walking.

The fisherman’s hut with its jetty, along with another hut a few meters inland are the only signs of civilization to say goodbye to when starting the stage in the unspoiled Es Alocs cove. There is no mobile phone coverage in all this inhospitable area. Chasteberries abound here, a typical Mediterranean shrub that gives the cove its name (its common name in Catalan is aloc). 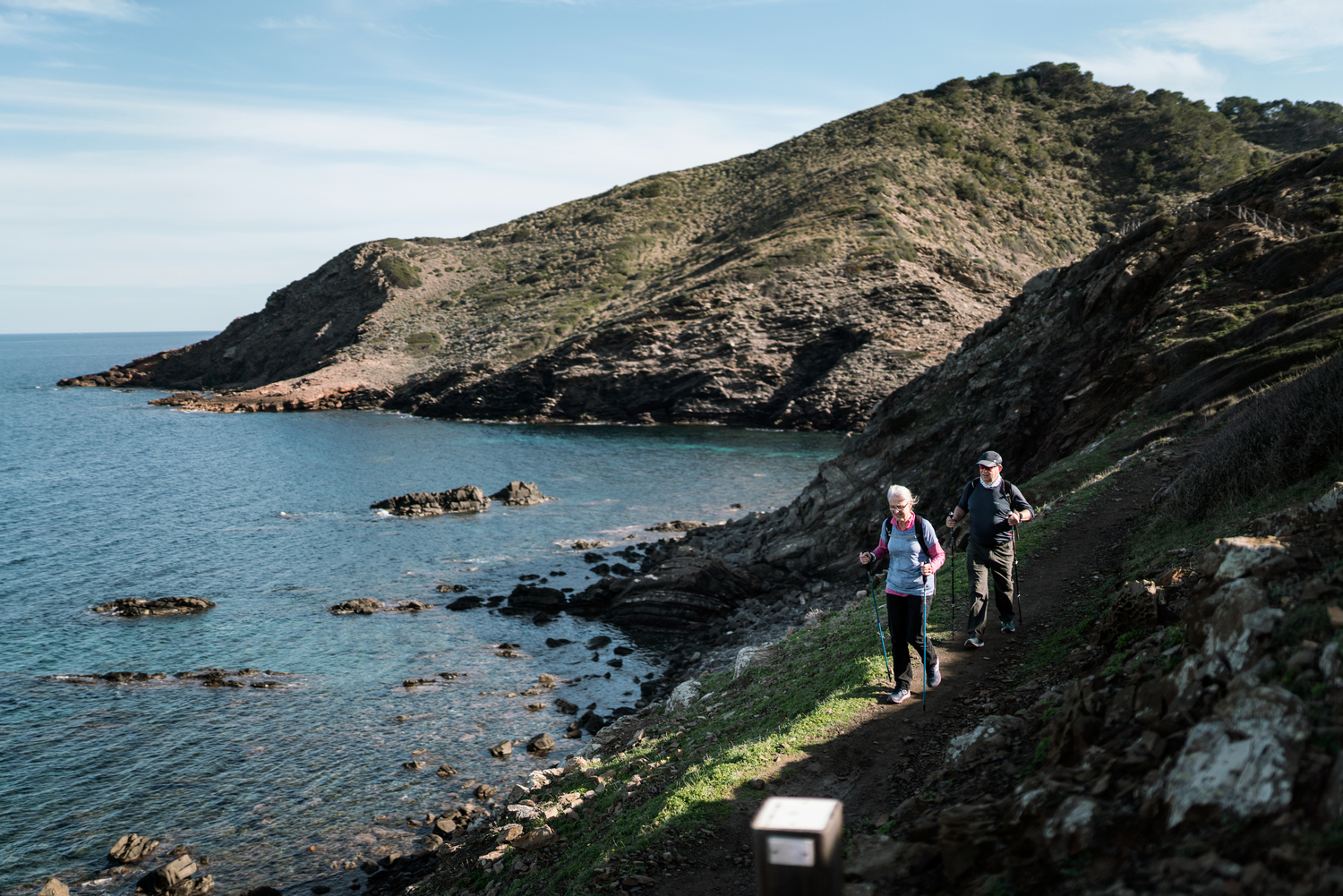 Two intense but brief coastline climbs lead to Cala del Pilar. It is another emblematic unspoiled beach in the north of Menorca, with golden sand of reddish tones and transparent waters, in addition to its own dune system.

When leaving Cala del Pilar you have to face a steep ascent that goes by the spring Font del Pilar, which nowadays practically does not flow. The climb leads to a crossroads within a pine forest that connects to the south with the Camí del Pilar. The route then begins a vertiginous descent towards Pla de Mar, crossing an old copper mine and providing a majestic view of Muntanya Mala.

Located right facing the path, this area is practically impassable, due to the terrain and the dense vegetation that covers it. It has the highest cliff on the entire island, which rises 199 meters above the sea which is often rough in this place. It is still part of the Reserva Marina del Nord de Menorca, the maritime core of the Biosphere Reserve.

With this vision on the retina, the CdC360 route leads to Pla de Mar and Macar d’Alforinet, a beach made of large pebbles rounded by the action of the sea.

The path now turns its back on the sea and enters a wide wooded area, with an important presence of holm oaks, some of them quite large and with shapes twisted by the passing of the years and the meteorological events. It is the habitat of numerous species of birds and mammals. Among the first, the Striped Kinglet, the smallest bird in Europe, stands out. Its weight barely exceeds five grams, but it is possible to distinguish its singing if you are silent and pay attention.

A long but gentle climb through forests is followed by a continuous descent that, passing through the Font de Sa Teula –refreshing spring, but no health guarantees–, leads to Algaiarens. This place, also known simply as La Vall (The Valley), is a wide flat area exploited by agriculture at least since the 10th century, as the texts from the time of the Muslim domination of Menorca (903-1287) attest.

The dune landscape announces the vicinity of the sea, in the neighboring Cala d’Algaiarens, which is formed by two wonderful unspoiled white sand and crystal clear waters beaches (Es Tancats and Es Bot). The GR route goes by a few meters inland and crosses its access parking lot, surrounded by the Son Àngel pine forest.

From La Vall to Cala Morell

About a kilometer further on, Ses Fontanelles cove appears. It is used as a jetty (it has a ramp and a small dock) and from time to time any boat anchors there. Without warning, the path gains height and becomes rockier from here on.

Going through the wild Codolar de Biniatram and its pebble beach and transparent waters, you can enjoy the different colors and shapes of the rocks, as well as a long panorama that extends from the Penyals de Corniola to the left (cliffs made of calcareous materials) and Punta Roja, Cap Gros and Cala en Carbó on the right (much older geology). This is just the transit point between the areas called respectively Tramuntana and dry Menorca.

This section, which runs through the Marina de Corniola, has a vegetation dominated by mastic, juniper and palm tree bushes, as well as rosemary, heather and chamomile bushes. The road goes by an aljibe, a traditional system for collecting and using rainwater.

The end of the stage is in the Cala Morell residential area. The site of Es Coll de Cala Morell, a Talayotic settlement inhabited more than 3,200 years ago, between 1600 and 1200 BC, overlooks the sea above the cliffs. A little further inland, there is a prominent Talayotic necropolis (1500-300 BC) and the rock-cut caves (hypogea) can be seen.